SANCTUARY OF THE NATIVITY

The origin of the Sanctuary dates back to the Middle Ages and is explained by a combination of history and legend: according to tradition, at the end of the 15th century, a kiln worker erected a rural pillar with an image of the Madonna and Child to ensure that his bricks were baked properly. For almost a century, the pillar remained hidden in the brambles of the valley until a hunter accidentally hit it in 1592, scratching the belly of the Virgin Mary, who miraculously bled. To expiate his sin, the hunter, Giulio Sargiano, collected funds to repair the damage and from that moment on, the population of Vico also contributed, deeply moved by the event and devoted to the Virgin. The first chapel around the pillar was built in 1594 in thanksgiving to the Virgin for the liberation of Vico from a plague and only a year later, the Bishop of Mondovì authorised devotion to the Holy Image, which was now the focus of large pilgrimages.

This attracted the attention not only of populations afflicted by hunger and poverty, but also of the nobility, so much so that in 1596 Duke Carlo Emanuele I of Savoia commissioned the architect Ascanio Vitozzi to build a large sanctuary in honour of the Virgin, to welcome the faithful but also to house the future burial place of the family (a function later transferred to the Basilica of Superga). Construction slowed down considerably when the architect died in 1615 and came to a complete halt when the duke died only 15 years later. Nor did the devastating plague of 1630, the civil war and the great salt rebellion help, the end of which marked a change of course: the Virgin was crowned in 1682 as a sign of thanksgiving, and construction of the Sanctuary resumed by engineer and architect Francesco Gallo at the encouragement of Filippo Juvarra.

In 1700 work resumed with great enthusiasm, the great drum was erected and the great dome, symbol of the great Piedmontese Baroque, was completed. It was then the turn of the great paintings completed by numerous artists, including I Dallemani and Sebastiano Galeotti, but above all Mattia Bortoloni and Felice Biella, who developed over 6000 square metres of frescoes with a single theme between 1746 and 1748.

The sanctuary took its current form in 1884 when the bell towers and the three façades were built by the architect Camillo dei Conti Riccio, shortly after the temple was recognised as a national monument by royal decree in 1880.

Buy Now SANCTUARY OF THE NATIVITY 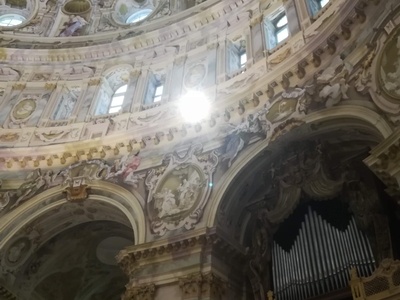 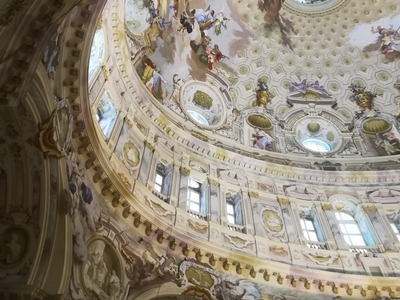 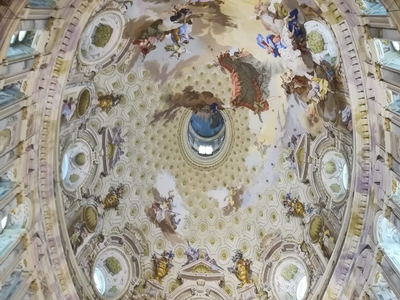 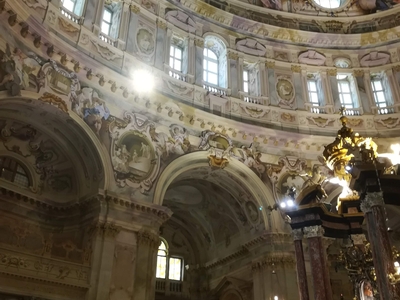 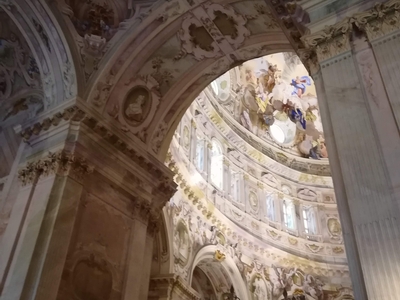 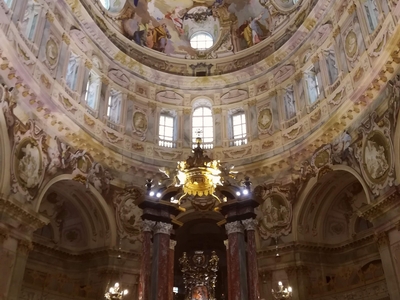